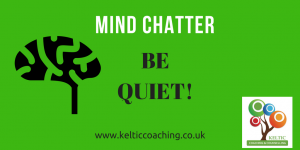 Ever felt like there’s a battle taking place in your mind, where there is an army of thoughts crashing around in your head? But these thoughts aren’t all on the same side, some are positive, some are negative. They can be pretty intrusive and compete to win your attention so that you act out on those thoughts. Sometimes it can seem we have no control and sometimes we are not always aware of how this battle influences our behaviour.

Mind chatter is made up of voices from our past: our parents, old relationships, siblings, teachers, bosses, etc. For some reason unbeknown to us, we store snippets of information from each of these influences over time and they build up a picture of how we see ourselves, others and the world.

When the mind chatter is positive, it encourages us to feel better about who we are, how we feel about others and notice the good in our world. However, when the mind becomes consumed with negative automatic thoughts shouting for our attention, it’s difficult to ignore them and life can become stressful. If we go back to prehistoric times, our minds were programmed to be on high alert for danger in order to survive being eaten by a Dinosaur! As we have evolved, that basic survival programming has stayed with us, albeit in a less threatening environment. Our minds are still more comfortable in accepting negative information as that would have been the danger, it’s a strange sort of self protection mechanism but one that can actually achieve the opposite.

Most of the chatter is old stuff or future stuff that hasn’t occurred yet, a mixture of happiness and sadness. And at some point, for some reason, we unconsciously decided to bring that stuff along with us and if a similar experience happened again, the positive or negative army would recruit it. The bad news is – the negative army are much stronger and great at recruiting new members. The positive army are that bit quieter so struggle to make themselves heard.

So can we take control and strengthen our positive army? Yes we can. It can be tough fronting up to the negative army but the key is to take it slowly and work one step at a time. There are lots of techniques to help with this but an essential before you start, is having the motivation to change.

Social
« Top reasons for using a Life Coach
We are moving to Plymouth! »

Are you looking for some answers? Do you need support to find solutions?

Keltic Coaching & Counselling can help by working collaboratively with you through Life Coaching or Counselling.

Sessions can be provided face-to-face, Skype, email or telephone.

Keltic Coaching & Counselling offers a FREE 30 minute consultation, giving you the opportunity to meet and discuss your needs.

Use the search box to find the product you are looking for.